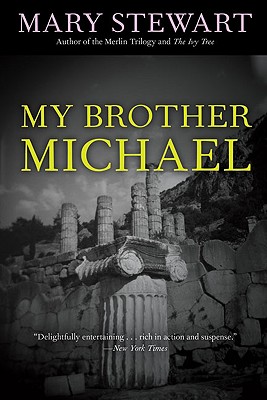 Mary Stewart, author of many bestselling novels, has been often compared with the Bronte sisters. Her 1960 classic My Brother Michael, with its superb mingling of romance and suspense, its vivid descriptions and overtone of impending disaster, is further evidence that the comparison is richly deserved. Perhaps Camilla Haven unintentionally invoked the gods that afternoon in the crowded Athens cafe when she wrote to a friend, "Nothing ever happens to me." But a few hours later, an extraordinary train of events had dispatched Camilla to Delphi, to be in the company of a charming but quietly determined Englishman named Simon Lester. Simon told Camilla he had come to the ancient Greek ruins to "appease the shade" of his brother Michael, killed some fourteen years earlier on Parnassus. From a curious letter Michael had written, Simon believed his brother had stumbled upon something of great importance hidden in the craggy reaches of the mountainside. And then Simon and Camilla learned that they were not alone in their search . . .

Mary Stewart is the author of 20 novels, including the Merlin trilogy, The Ivy Tree, Nine Coaches Waiting, and Thornyhold.

"Stewart's deft writing and plotting put her among the best of the adventure-suspense-romance novelists." Library Journal

"A fast-moving suspense novel set against the background of Delphi, which affords the reader even more hair-raising nightmarish adventures than in earlier novels."  Kirkus Reviews

"This detective adventure . . . is seen through the eyes of a characteristic Stewart heroine; and surely there are few more attractive young women in today’s popular fiction."  New York Times

"Mary Stewart’s best novel to date . . . The villains are wonderfully ruthless, the peoplemajor and minorare alive and picturesque, and the treasure-hunt theme has perhaps never had such an awesome and uplifting object."  San Francisco Chronicle

"A perfect blend of romance and suspense with a strong and charming heroine...Though written decades ago, it holds up beautifully." Nora Roberts, bestselling author