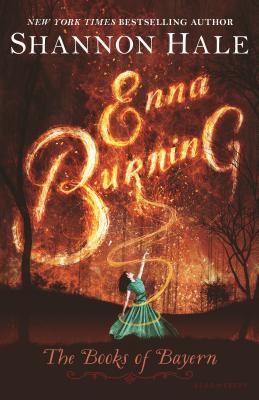 In this second book in New York Times bestselling, Newbery Honor-winning author Shannon Hale's beloved YA fantasy series Books of Bayern, the fire could save Enna . . . or destroy her.

Enna's brother, Leifer, has found the secret to an extraordinary power--to make fire without a spark. It's an ability that could be used for good . . . if he can control it. But Enna can't decide if it's a power she wants for herself, or one that should be extinguished forever.

When their home country of Bayern goes to war, the choice becomes unbearable. Enna never imagined the warm, life-giving energy of fire could destroy anything she loves, but now she must try to save Bayern and herself before fire consumes her entirely.

Don't miss any of these other books from New York Times bestselling author Shannon Hale:

Book of a Thousand Days

Illustrated by Victoria Ying
Diana: Princess of the Amazons


For Adults
Austenland
Midnight in Austenland
The Actor and the Housewife

Raybearer -- the strongest fantasy book AND debut of the fall season -- is the book that Leigh Bardugo and Tomi Adeyemi fans have been waiting for.  Adventure, fantasy, magic, love and loyalty are at the heart of Tarasai’s unthinkable quest in this Nigerian-inspired tale. Epic and cinematic, this is world-building par excellence. Jordan Ifueko has herself a series opener that will knock off your socks and steal your heart. Thrilling!