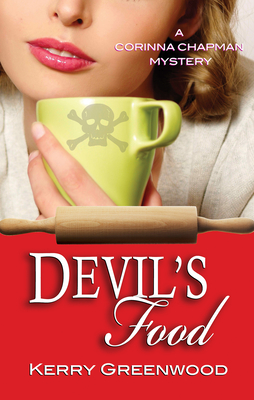 This is book number 3 in the Corinna Chapman Mysteries series.

If there's one thing that Corinna Chapman, baker extraordinaire and proprietor of the Earthly Delights Bakery, can't abide, it's people not eating well, particularly when there are delights like her very own, just-baked, freshly buttered sourdough bread to enjoy. So when a strange cult which denies the flesh and eats only famine bread turns up, along with a malnourished body, Corinna is very disturbed indeed.

On top of that, her hippie mother, Starshine, has turned up out of the blue, hysterical that Sunlight, Corinna's father, has absconded to Melbourne with all their money and a desire for a new young lover. Someone is poisoning people with weight loss herbal teas, and then odd things are happening at the nearby Cafe Vlad Tepes, which attracts a very strange clientele indeed. It's a delicious recipe for murder, mayhem, and mystery.

Kerry Greenwood was born in the Melbourne suburb of Footscray and after wandering far and wide, she returned to live there. She has degrees in English and Law from Melbourne University and was admitted to the legal profession on the 1st April 1982, a day which she finds both soothing and significant. Kerry has written three series, a number of plays, including The Troubadours with Stephen D'Arcy, is an award-winning children's writer and has edited and contributed to several anthologies. The Phryne Fisher series (pronounced Fry-knee, to rhyme with briny) began in 1989 with Cocaine Blues which was a great success. Kerry has written twenty books in this series with no sign yet of Miss Fisher hanging up her pearl-handled pistol. Kerry says that as long as people want to read them, she can keep writing them. In 2003 Kerry won the Lifetime Achievement Award from the Australian Association.