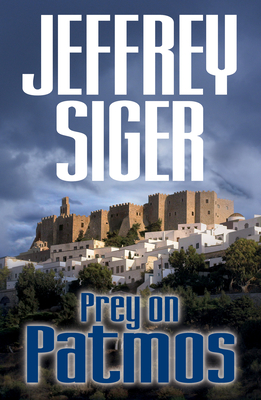 This is book number 3 in the Chief Inspector Andreas Kaldis Mysteries series.

Saint John wrote the apocalyptic Book of Revelation over 1900 years ago in a cave on Greece's eastern Aegean island of Patmos. Today, on the pristine Aegean peninsula of Mount Athos, isolated from the rest of humanity, twenty monasteries sit protecting the secrets of Byzantium amid a way of life virtually unchanged for more than 1500 years.

When a revered monk from that holy island's thousand-year-old monastery is murdered in Patmos' town square during Easter Week, Chief Inspector Andreas Kaldis of Greece's twenty-first century Special Crimes Division is called upon to find the killer before all hell breaks loose.

Andreas' impolitic search for answers brings him face-to-face with a scandal haunting the world's oldest surviving monastic community. He finds that this ancient and sacred refuge harbors some very modern international intrigues that threaten to destroy the very heart of the Church.

Jeffrey Siger was born and raised in Pittsburgh, Pennsylvania, practiced law at a major Wall Street law firm, and later established his own New York City law firm where he continued as one of its name partners until giving it all up to write full-time among the people, life, and politics of his beloved Mykonos. The Mykonos Mob is the tenth novel in his internationally best-selling and award nominated Chief Inspector Andreas Kaldis series, following up on An Aegean April, Santorini Caesars, Devil in Delphi, Sons of Sparta, Mykonos After Midnight, Target: Tinos, Prey on Patmos, Assassins of Athens, and Murder in Mykonos.The New York Times described Jeffrey Siger's novels as thoughtful police procedurals set in picturesque but not untroubled Greek locales, and named him as Greece's thriller writer of record. The Greek Press called his work prophetic, Eurocrime described him as a very gifted American author...on a par with other American authors such as Joseph Wambaugh or Ed McBain, and the City of San Francisco awarded him its Certificate of Honor citing that his acclaimed books have not only explored modern Greek society and its ancient roots but have inspired political change in Greece. He now lives in Greece.