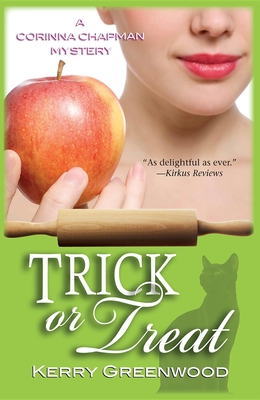 This is book number 4 in the Corinna Chapman Mysteries series.

When crowds flock to purchase bread from a cut-price franchise bakery just down the street from Earthly Delights, baker Corinna Chapman is understandably nervous. Meanwhile, her lover Daniel's old friend Georgiana Hope has set up residence in his house. She's tall, blonde, and gorgeous, and it doesn't take Corinna long to suspect she's up to something. Daniel is making excuses, and Corinna is worried about his sudden, frequent absences. But even more worrisome is the strange outbreak of madness that seems to be centered on Lonsdale Street.

Can Corinna master a maze of health regulations, her missing boyfriend, sinister strangers, fraudulent companies, and back-alley ambushes? Or this time, will Earthly Delights Bakery be well and truly done?

Kerry Greenwood is the author of more than 20 novels and six non-fiction books. Ms. Greenwood has received the Ned Kelly Lifetime Achievement Award from the Crime Writers' Association of Australia. She is also an advocate in Magistrates' Courts for the Legal Aid Commission. She is not married, has no children and lives with a registered Wizard.

“A gathering of witches in Melbourne to celebrate Samhain; a man named Barnabas who calls himself “king of the witches”; a rash of bad drug reactions; a cache of valuables stolen from Greek Jews during WWII; and the appearance of Daniel’s beautiful and svelte former girlfriend, Georgiana Hope, add up to a rich confection that nicely balances humor, villainy and a puzzle.” –Publishers Weekly on Trick or Treat   “Working a case loosely based on a true story, Corinna and her friends are as delightful as ever, the killer a surprise and the appended recipes a treat.” –Kirkus Reviews on Trick or Treat   STARRED REVIEW “Lose all thought of New Year’s diets, you who enter Australian author Greenwood’s delectable second Corinna Chapman cozy (after 2007’s Earthly Delights).” Publishers Weekly on Heavenly Pleasures