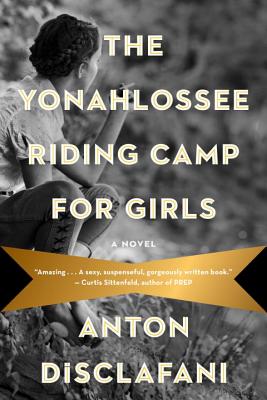 By Anton DiSclafani
$27.95
Not Available - Possibly Out of Print

“In 1930, at the height of the Great Depression, Theadora Atwell is forced to leave the only home she has ever known and the family she cherishes to attend the Yonahlossee Riding Camp for Girls in the Blue Ridge Mountains of North Carolina. Not only has she been banished to a world she knows nothing about, but also her life until this point has been lived mostly in seclusion with her nuclear family on a thousand-acre orange ranch in Florida, an environment that could not be more different than the one in which she finds herself. The reason for her banishment is a secret slowly revealed. This is a coming-of-age story you won't soon forget.”
— Terry Gilman, Mysterious Galaxy Books, San Diego, CA

This summer's first romantic page turner. Michiko Kakutani, "The New York Times"
Named a most anticipated book for Summer 2013 by "The Wall Street Journal "and "Publishers Weekly "and "USA Today," NPR, and "People "summer reads pick
From the author of "The After Party," coming May 2016, a lush, sexy, evocative debut novel of family secrets and girls -school rituals, set in the 1930s South.
It is 1930, the midstof the Great Depression. After her mysterious role in a family tragedy, passionate, strong-willed Thea Atwell, age fifteen, has been cast out of her Florida home, exiled to an equestrienne boarding school for Southern debutantes. High in the Blue Ridge Mountains, with its complex social strata ordered by money, beauty, and girls friendships, the Yonahlossee Riding Camp for Girls is a far remove from the free-roaming, dreamlike childhood Thea shared with her twin brother on their family's citrus farm a world now partially shattered. As Thea grapples with her responsibility for the events of the past year that led her here, she finds herself enmeshed in a new order, one that will change her sense of what is possible for herself, her family, her country.
Weaving provocatively between home and school, the narrative powerfully unfurls the true story behind Thea's expulsion from her family, but it isn t long before the mystery of her past is rivaled by the question of how it will shape her future. Part scandalous love story, part heartbreaking family drama, "The Yonahlossee Riding Camp for Girls "is an immersive, transporting page-turner a vivid, propulsive novel about sex, love, family, money, class, home, and horses, all set against the ominous threat of the Depression and the major debut of an important new writer.