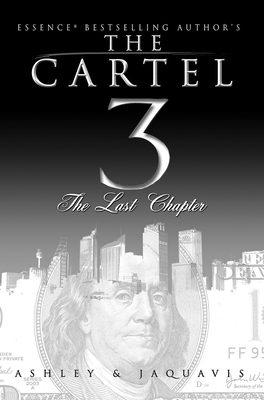 This is book number 3 in the The Cartel series.

The Cartel has come full circle with this fast-paced, groundbreaking novel, the finale to the hit series by New York Times bestsellers Ashley & JaQuavis. Miamor is fighting for her life in the belly of the beast. She's been kidnapped, and she's staring death in the eye. Is the reign over for the head of the Murda Mamas? Carter is in federal custody and leaves the Diamond Empire to Zyir and Mecca. When the past comes back to haunt Mecca and the truth finally comes to light, will The Cartel rise or fall? Breeze is in the clutches of the crazed Ma'tee, and she desperately searches for a way out. Will she escape, or die his love slave? The answers to these questions lie inside the pages of Cartel 3: The Final Chapter. Open it to discover the shocking truth, and prepare yourself for the unpredictable conclusion of one of the best street series of all time.
Ashley & JaQuavis hit the street lit scene at the age of 17 when they were discovered by Carl Weber. Their first novel, Dirty Money, was an instant hit, putting them on the road to literary success. They have published more than twenty novels as a duo, including the New York Times bestselling Cartel series. They are pursuing movie and television projects to bring some of their blockbuster books to the big screen. Now married, the pair still lives in Flint, Michigan, the city that inspired many of their gritty urban tales.

Action and adventure on the high seas, with a spunky, scrappy almost thirteen year old Sai, who with her wits, sheer determination and uncanny ability to draw what’s in front of her, just might become a valued mapmaker for Mangkon . But at what cost? Unputdownable and heart racing to the very end.