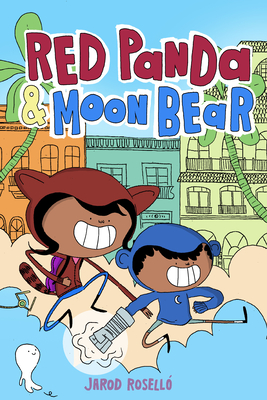 
Available to Order from Our Warehouse
Two Latinx kids battle supernatural threats to their working-class neighborhood with the power of science, magic, and a pair of very special hoodies.

Red Panda and Moon Bear are the defenders of their community! Together, these brave siblings rescue lost cats, scold bullies, and solve mysteries, all before Mami and Papi get home. But lately... the mysteries have been EXTRA mysterious. All of RP and MB's powers may not be enough to handle spooks, supervillains, alien invaders, and time warps! It'll take all their imagination -- and some new friends -- to uncover the secret cause behind all these events before the whole world goes crazy.

In his first book for young readers, Cuban-American cartoonist Jarod Roselló presents a whimsical and tender-hearted adventure, packed with Saturday-morning action and glowing with Caribbean sunshine.
Jarod Roselló is a Cuban-American cartoonist, writer, and educational researcher from Miami, Florida. His debut graphic novel, The Well-Dressed Bear Will (Never) Be Found, was published in 2015 by Publishing Genius Press. His chapbook, The Star, was the winner of the 2015 Epiphany Literary Magazine Chapbook Contest. His short fiction and comics have been published in The Rumpus, Hobart, Hayden's Ferry Review, Sonora Review, and The Collagist, among other places. His childhood and educational research has been published in Bank Street Occasional Papers, International Review of Qualitative Research, and Contemporary Issues in Early Childhood. He teaches comics and fiction in the creative writing program at the University of South Florida.

"Red Panda & Moon Bear is fun, wacky and heartfelt. Everyone can enjoy this adventure, but it will resonate especially with Latinx kids. I look forward to seeing more!" — Duncan Tonatiuh, author of Dear Primo and Separate Is Never Equal

"A delightful book... This book is fantastical in the best kind of way, with cool sci-fi, fantasy, and superhero elements woven throughout 11 chapters. And I love RP and MB's sense of adventure and cleverness. I think that perhaps the highest praise I have for the book is that I read it with my three-year-old, and he did not want to put it down." — Graphic Novel Resources