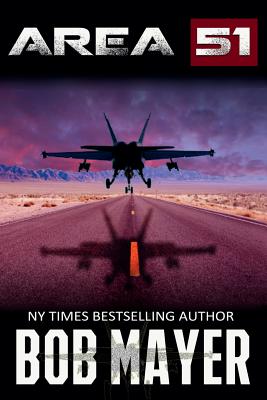 This is book number 1 in the Area 51 series.

Over 2 million sold. Screenplay by the writer of Alien.
Since before the dawning of modern man, an alien mothership and nine abandoned flying saucers have been hidden away in Area 51, a top-secret military base in the Nevada desert. Scientists have studied the crafts, hoping to unlock the secrets of the alien technology and, perhaps, the origins of life on Earth. But now a deranged general wants to activate the mothership's interstellar drive-and the consequences could prove catastrophic for humankind.
Dr. Hans Von Seeckt-an elderly scientist, ex-Nazi, and original member of the Area 51 research team-joins up with the president's science adviser, Dr. Lisa Duncan, and Special Forces officer Mike Turcotte to put a stop to the planned test flight and tell the public the truth about Area 51. Meanwhile, a brilliant archaeologist, Professor Nabinger, discovers a message on runes found in ancient Egypt that could change everything we think we know about human evolution and the role that alien visitation may have played in it.
They must race against time to unlock the secret of the ship--and to the origins of mankind itself.

New York Times bestselling author, West Point graduate, and former Green Beret Bob Mayer weaves military, historical, and scientific fact through his gripping works of fiction. His books span numerous genres-suspense, science fiction, military, historical, and more-and Mayer holds the distinction of being the only male author listed on the Romance Writers of America Honor Roll. As one of today's top-performing independent authors, Mayer has drawn on his digital publishing expertise and military exploits to craft more than fifty novels that have sold more than four million copies worldwide. These include his bestselling Atlantis, Area 51, and Green Beret series. Alongside his writing, Mayer is an international keynote speaker, teacher, and CEO