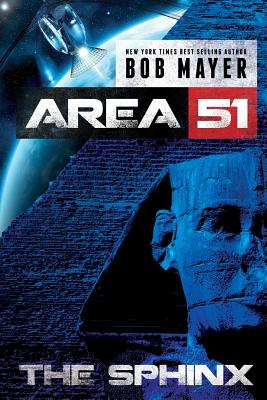 This is book number 4 in the Area 51 series.

Dr. Lisa Duncan and Special Forces officer Mike Turcotte know better than anyone that no secret is safe for long-especially one that offers untold power. Case in point: no sooner does Turcotte's elite Area 51 team uncover a dormant alien ship in earth orbit than a group of alien-human hybrids seizes it and uses its technology to commandeer a satellite array bristling with nuclear missiles. Now they're demanding that humankind hand over the key to an ancient stash of alien technology...or watch an entire continent be reduced to atomic rubble.
Doom seems certain, as the required key is believed lost to the ages-until an unwitting anthropologist discovers the first of many clues to its hiding place. As Duncan and Turcotte race to reach the key-and the powerful treasure it can unlock-ahead of their alien foes, the quest leads them deep into a deadly maze within the Great Sphinx of Giza. The prize? Nothing less than the legendary Ark of the Covenant.
Bob Mayer is a NY Times Bestselling author, graduate of West Point, former Green Beret (including commanding an A-Team) and the feeder of two Yellow Labs, most famously Cool Gus. He's had over 60 books published including the #1 series Area 51, Atlantis and The Green Berets. Born in the Bronx, having traveled the world (usually not tourist spots), he now lives peacefully with his wife, and said labs, at Write on the River, TN.

This book captures the cat look. I would know, I have lots of experience with so many people coming to look at me at the store. "The cat walked through with its whiskers, ears, and paws," all very important for cat life.