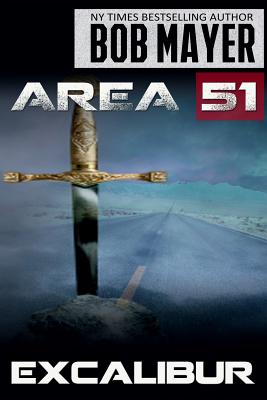 This is book number 6 in the Area 51 series.

In his time at Area 51, Mike Turcotte has learned one thing: we are not alone. As part of an elite Special Forces team, the former Green Beret has encountered things that are well beyond human understanding. Now, two ancient rivals from another world are vying to dominate Earth, and Mike and his team must choose which army to side with. The key to averting the crisis lies in a single weapon: Excalibur. The mythical, legendary sword of King Arthur is real and can unlock a galactic power beyond what anyone-human or alien-has ever seen. And Mike must keep it from falling into the wrong hands.
The race to recover Excalibur will lead the players all across the globe-from the ancient pyramids to the Great Wall of China, from a fortress on Easter Island to the heights of Mount Everest-in a high-stakes game in which the fate of humanity is the ultimate prize.
New York Times bestselling author, West Point graduate, and former Green Beret Bob Mayer weaves military, historical, and scientific fact through his gripping works of fiction. His books span numerous genres-suspense, science fiction, military, historical, and more-and Mayer holds the distinction of being the only male author listed on the Romance Writers of America Honor Roll. As one of today's top-performing independent authors, Mayer has drawn on his digital publishing expertise and military exploits to craft more than fifty novels that have sold more than four million copies worldwide. These include his bestselling Atlantis, Area 51, and Green Beret series. Alongside his writing, Mayer is an international keynote speaker, teacher, and CEO.