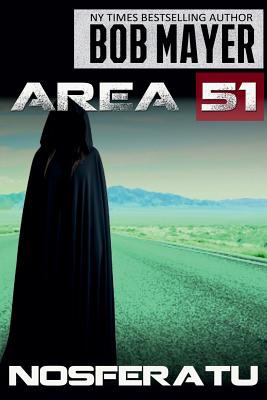 This is book number 8 in the Area 51 series.

The half-breed known only as Nosferatu has existed since ancient Egyptian times as part of a group of bioengineered beings that served the old gods.
But those gods are no more-eradicated by human efforts-so now Nosferatu schemes to thrust himself into the resulting power vacuum. In order to achieve this, he requires a piece of leftover alien technology known as the Holy Grail. With it, he can grasp true immortality, be freed of his need for human blood, and reunite with the lover the gods took from him so many years ago.
Yet his kin still stalk the earth as well-powerful creatures who have been both his allies and his enemies throughout history. And one of their numbers, Vampyr, has set his own deadly plans in motion concerning the Grail. As the two unstoppable forces converge on their singular goal, the inevitable clash of strength and cunning could usher in a new Age of the Undead...or extinguish all life on Earth.

Bob Mayer is a NY Times Bestselling author, graduate of West Point, former Green Beret (including commanding an A-Team) and the feeder of two Yellow Labs, most famously Cool Gus. He's had over 60 books published including the #1 series Area 51, Atlantis and The Green Berets. Born in the Bronx, having traveled the world (usually not tourist spots), he now lives peacefully with his wife, and said labs, at Write on the River, TN.