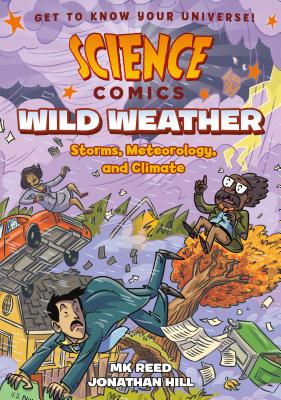 As “snowpocalypse” descends once again, one temperamental weatherman is determined to set the record straight on the myths and misconceptions surrounding the elements. What is the difference between weather and climate? How do weather satellites predict the future? Can someone outrun a tornado? Does the rotation of the Earth affect wind currents? And does meteorology have anything to do with meteors? Stormin’ Norman Weatherby is gearing up to answer all your wildest questions!

Get ready to explore the depths of the ocean, the farthest reaches of space, and everything in between! These gorgeously illustrated graphic novels offer wildly entertaining views of their subjects. Whether you're a fourth grader doing a natural science unit at school or a thirty-year-old with a secret passion for airplanes, Science Comics is for you!

MK Reed is the writer of Americus, The Cute Girl Network, Palefire, and the Eisner-nominated Science Comics: Dinosaurs. She writes and draws About a Bull, a web-comic adaptation of Irish mythology. MK lives in Portland, Oregon, with her very tall husband.

Jonathan Hill is an Ignatz-nominated cartoonist who lives in Portland, Oregon, with his wife and cat. He was the artist on Americus and has had work in books from Fantagraphics, Dark Horse, and Roar. His first solo book, Odesssa, was published in 2020. He also teaches comics in the illustration department of the Pacific Northwest College of Art.

"This series—written by a handful of authors—seems determined to offer a useful introduction to anything a curious grade-school student might wonder about. The insight behind these books is a powerful one. So much information about the world around us is actually better conveyed visually, through charts, illustrations, and sequential panels, than purely using words." —New York Times

"Like having a Time Life Science Library in comic books. Which is awesome!" —Popular Science