Science Comics: Robots and Drones: Past, Present, and Future (Hardcover) 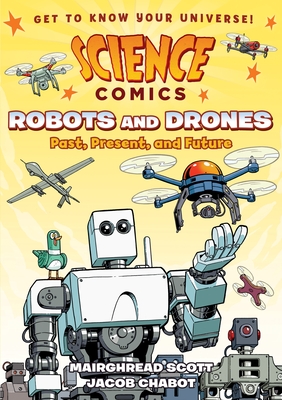 In factories! In the sky! In your cars and phones! In your own home! Robots are everywhere! And they have been for a lot longer than you might realize.

From tea-serving robots in feudal Japan to modern rovers exploring Mars, robots have been humanity's partners, helpers, and protectors for centuries! Join one of the world's earliest robots, a mechanical bird named Pouli, as he explores where robots came from, how they work, and where they’re going in this informative and hilarious new book! Ever dreamt of building your own best friend? It might be easier than you think!

Every volume of Science Comics offers a complete introduction to a particular topic—dinosaurs, coral reefs, the solar system, volcanoes, bats, flying machines, and more. These gorgeously illustrated graphic novels offer wildly entertaining views of their subjects. Whether you're a fourth grader doing a natural science unit at school or a thirty year old with a secret passion for airplanes, these books are for you!

Mairghread Scott is an animation and comic book writer. Her animation includes Marvel’s Guardians of the Galaxy, Ultimate Spider-Man: Web Warriors, and more. Her published books include Marvel Universe Guardians of the Galaxy, Transformers: Till All Are One, Transformers: Windblade, and Wonder Woman 75th Anniversary Special #1, as well as her graphic novels with First Second, The City on the Other Side and Science Comics: Robots and Drones.

Jacob Chabot is an Eisner Award-nominated and New York Times Bestselling cartoonist. He is best known for his work on all-ages comics like Spongebob Comics, The Simpsons, and his creator owned book The Mighty Skullboy Army.

"This series—written by a handful of authors—seems determined to offer a useful introduction to anything a curious grade-school student might wonder about. The insight behind these books is a powerful one. So much information about the world around us is actually better conveyed visually, through charts, illustrations, and sequential panels, than purely using words." —New York Times

"Like having a Time Life Science Library in comic books. Which is awesome!" —Popular Science

"The sequential art—which features a diverse cast of young STEM enthusiasts, including one wearing a hijab—infuses the discourse with life"–School Library Journal

"A lighthearted, enjoyable introduction to a fascinating subject."–Kirkus