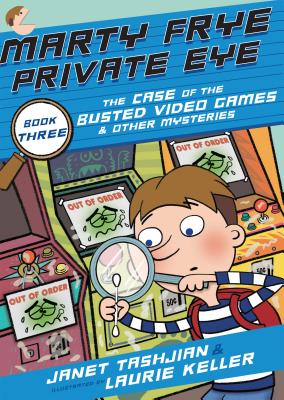 This is book number 3 in the Marty Frye, Private Eye series.

In this new collection of mysteries, everyone’s favorite poet detective is back in action. When a prankster tangles all the school jump ropes into knots and gym is canceled, Marty pins down the culprit. When five machines are mysteriously found broken at the arcade, Marty jumps on the case. And when Mom’s phone goes missing after a trip to the mall, Marty races against the clock to track it down before dinner. But can he still manage to make up rhymes while he solves new crimes?

Broken into three short stories with a generous amount of art on each page, this is an ideal stepping stone to longer chapter books. Young readers will be off in search of a rhyme in no time.

Laurie Keller is the bestselling author-illustrator of many books for kids, including Do Unto Otters; Potato Pants!; The Scrambled States of America; the Geisel Award-winning We Are Growing!; and Arnie the Doughnut, as well as three books in the Adventures of Arnie the Doughnut chapter book series.

Growing up in Michigan, Laurie always loved to draw, paint and write stories. She earned a B.F.A. at Kendall College of Art and Design, then worked at Hallmark Cards in Kansas City as a greeting card illustrator for seven years. One night, the idea for a children’s book popped into her head and after showing the story to several publishers in New York City, she quit her job and moved there. The following year, that story idea was a published book—The Scrambled States of America. Laurie loved living in NYC, but she returned to her home state, where she lives in the woods along the shores of Lake Michigan.

A fun new graphic novel for fans of The Witch Boy that follows a young girl who discovers she is a witch in the modern day. But her town has a centuries-long history of  anger, resentment, and fear of these independent women with magical powers. But the witch community may not be as welcoming when compared to the town. This story looks at how to relate to history and family in a fun new way. And don't forget the talking fat black cat! - Jessica