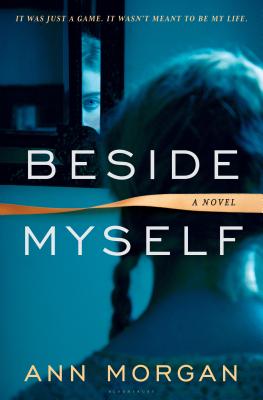 Six-year-old Helen and Ellie are identical twins, but Helen is smarter, more popular, and their mother's favorite. Ellie, on the other hand, requires special instruction at school, is friendless, and is punished at every turn.

Until they decide to swap places--just for fun, and just for one day--and Ellie refuses to switch back. Everything of Helen's, from her toys to her friends to her identity, now belongs to her sister. With those around her oblivious to her plight, the girl who used to be Helen loses her sense of self and withdraws into a spiral of behavioral problems, delinquency, and mental illness. In time, she's not even sure of her memory of the switch.

Twenty-five years later, she receives a call that threatens to pull her back into her sister's dangerous orbit. Will she take this chance to face her past?

Ann Morgan is the author of The World Between Two Covers, based on her year-long journey around the world via books from every country. She continues to blog about her adventures with world literature at ayearofreadingtheworld.com. Morgan's writing has also appeared in The Independent, The Financial Times, The Scotsman, BBC Culture, and The Guardian, among many others. She lives in London.

"Disturbing, thought-provoking, and ultimately hopeful, this is a moving and accomplished piece of writing." —The Independent on Sunday

"Beside Myself will inevitably be compared for good reasons [to] The Girl on the Train (2015). Morgan's stunning debut is a thrilling and thought-provoking psychological drama." —starred review, Booklist

"It’s not often we find a new book the whole office agrees on, but Ann Morgan has written that very thing . . . An unsettling story of twin sisters and the nature of identity . . . as gripping and powerful as Room." —Reader's Digest

“Fascinating . . . Ambitious and gritty; a modern take on the age-old question of fate versus free will.” —Kirkus Reviews

"A compelling read." —The Scotsman

"Morgan's debut psychological thriller is a stunning portrayal of what might happen when one's identity is stolen. The writing is succinct, spot on and moves at a rapid pace. Fans of Gillian Flynn's Sharp Objects will want to add Beside Myself to their reading list. Set aside time to read though, since you won't want to put this book down." —Shelf Awareness

“[A] psychological debut thriller that fans of S.J. Watson and Gillian Flynn will want to add to their to-read lists.” —Library Journal

"Beautifully written . . . A startling account of a damaged woman . . . Suspenseful and exquisitely structured." —Curled Up With a Good Book