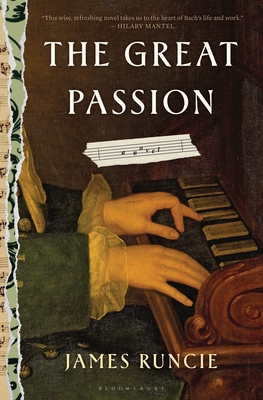 From acclaimed bestselling author James Runcie, a meditation on grief and music, told through the story of Bach's writing of the St. Matthew Passion.

In 1727, Stefan Silbermann is a grief-stricken thirteen-year-old, struggling with the death of his mother and his removal to a school in distant Leipzig. Despite his father's insistence that he try not to think of his mother too much, Stefan is haunted by her absence, and, to make matters worse, he's bullied by his new classmates. But when the school's cantor, Johann Sebastian Bach, takes notice of his new pupil's beautiful singing voice and draws him from the choir to be a soloist, Stefan's life is permanently changed.

Over the course of the next several months, and under Bach's careful tutelage, Stefan's musical skill progresses, and he is allowed to work as a copyist for Bach's many musical works. But mainly, drawn into Bach's family life and away from the cruelty in the dorms and the lonely hours of his mourning, Stefan begins to feel at home. When another tragedy strikes, this time in the Bach family, Stefan bears witness to the depths of grief, the horrors of death, the solace of religion, and the beauty that can spring from even the most profound losses.

Joyous, revelatory, and deeply moving, The Great Passion is an imaginative tour de force that tells the story of what it was like to sing, play, and hear Bach's music for the very first time.

James Runcie is an award-winning film-maker, playwright and literary curator. He is the author of twelve novels that have been translated into twelve languages, including the seven books in the Grantchester Mysteries series. He has been Artistic Director of the Bath Literature Festival, Head of Literature and Spoken Word at the Southbank Centre, London, and Commissioning Editor for Arts on BBC Radio 4. He is a Fellow of the Royal Society of Literature. He lives in Scotland.

"The Great Passion shows—without a trace of glibness—how timeless art grows out of ‘fragile, flawed and human’ lives shadowed by fear, guilt and grief… Mr. Runcie reminds us that the right words, too, may help us live better amid the ruins left by time." - Wall Street Journal

“This wise, refreshing novel takes us to the heart of Bach's life and work. James Runcie's expert imagination makes his picture of Leipzig specific and convincing, and behind the music's echo lies a touching human story. It offers a glimpse into a world more faithful and attentive than our own, but not alien to us: 'we listen to music as survivors,' the great Cantor says.” —Hilary Mantel

". . . a symphonic, contemplative pleasure … [The Great Passion] vibrates with a deep love of music, including the fervor and full-bodied joy of the creative process." - Christian Science Monitor

"James Runcie, best known for his Grantchester Mysteries series, has conjured a vivid image of Bach … Runcie is brilliant at chronicling Bach’s mission to take the messiness of grief and love and turn them into something beautiful and sacred. Even readers as tone-deaf as I am will be enriched by this novel and its glimpse at genius." - The Times (London)

“Rich in its descriptions of music, devotion to God, and the daily hardships of 18th-century life … A delightful novel filled with warmth, music, and an obvious love of Bach.” —Kirkus Reviews, Starred Review

“Runcie, best known for his empathic Grantchester mystery series, displays the same gifts for characterization in this account of Johann Sebastian Bach's composition of the “St Matthew Passion” in 1727 . . . This is historical fiction of the highest order.” —Publishers Weekly, Starred Review

"Warmly, reverently, Runcie brings alive what it is like to take part, for the very first time, in one of the most extraordinary pieces of music ever written." - Daily Telegraph