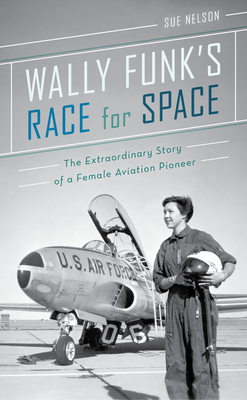 
NOT AVAILABLE
Wally Funk was among the Mercury 13, the first group of American pilots to complete NASA’s 1961 Women in Space program. Funk breezed through the rigorous physical and mental tests, her scores beating those of many of the male candidates—even John Glenn. Just one week before Funk was to enter the final phase of training, the entire program was abruptly cancelled. Politics and prejudice meant that none of the more-than-qualified women ever went to space. Undeterred, Funk went on to become one of America’s first female aviation inspectors and civilian flight instructors, though her dream of being an astronaut never dimmed.
In this offbeat odyssey, journalist and fellow space buff Sue Nelson travels with Wally Funk, approaching her 80th birthday, as she races to make her giant leap. Covering their travels across the United States and Europe—taking in NASA’s mission control in Houston and Spaceport America in New Mexico, where Funk’s ride to space awaits—this is a uniquely intimate and entertaining portrait of a true aviation trailblazer.
Sue Nelson is an award-winning science journalist and broadcaster. A former BBC TV science and environment correspondent, Nelson also was editor of The Biologist and currently makes short films on space missions for the European Space Agency. She received a New York Festivals International Radio Program award (2017) for her documentary about the history of women in space, called Women with the Right Stuff, that was made with Wally Funk.
"Wally Funk's Story is a textbook study in indefatigable, american, can-do spirit."— Guardian

“An extraordinary, quirky book... A global Thelma and Louise–style adventure... It’s a great story, and it throws fascinating light on the story of female space travel.” — Daily Mail Book of the Week

“Inspiring... I am in great admiration of Wally Funk who showed tremendous courage and determination at a time when the world of space flight was dominated by men.” —Jan Wörner, Director General of the European Space Agency

“An absolute joy... Beautifully told by one of the world’s foremost space journalists, this fascinating portrait puts the story of women in space front and center.” —Dallas Campbell, author of Ad Astra

“A wonderful, vivid portrait of Wally Funk that explores the crucial part women have played in space exploration.” —Libby Jackson, author of A Galaxy of Her Own

"Funk is accomplished, charismatic, and energetic, and readers will be glad they got to spend time with her and Nelson via this well-written, entertaining book." --Publishers Weekly