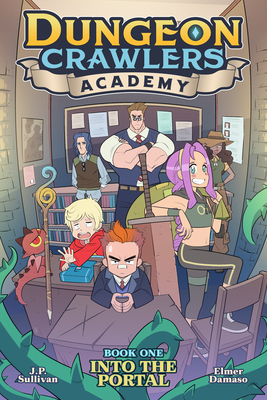 
Coming Soon - Available for Pre-Order Now
Modern-day students set out for sword-and-sorcery adventure in this full-color graphic novel series for kids and adults!

When four kids went through a mysterious portal, they discovered an endless dungeon full of treasure, monsters, and magic! They returned home as heroes. But when adults tried to enter the portal, they couldn’t. Only kids were granted access. And so the Dungeon Crawlers Academy was born: a school devoted to training young adventurers to explore the dungeon and bring back its fabulous treasures.

Nathan always dreamed of being a hero. A dangerous encounter with a tiny dragon becomes his ticket into the Academy. Now, a whole new life awaits, as Nathan struggles to learn how to use magic...and survive school!

J.P. Sullivan is an editor of translated Japanese manga and an author of both fantasy and science fiction. This is his graphic novel debut.