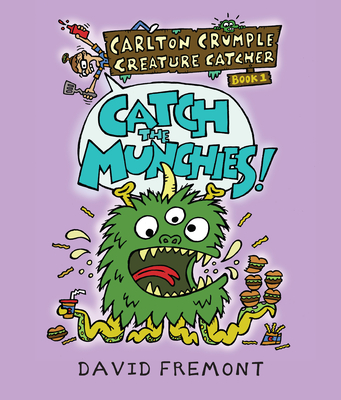 This is book number 1 in the Carlton Crumple Creature Catcher series.

Fast food, monsters, and super funny, madcap adventure combine in this graphic novel series starter as Carlton Crumple sets out to stop the Munchie monsters from taking over every Chubbzy Cheeseburger in America! Fans of series like Lunch Lady and Dog Man will gobble this down.

Carlton Crumple has been obsessed with monsters ever since his older brother dressed up like them to scare him. He is determined to rid the world of monsters! Even though he's only eleven. . . .

When a band of fast food crazed Munchies storm into a burger joint where Carlton is working, he finally has his chance! A cross-country chase ensues. Cops! Munchies! Carlton and his best friend Lulu!

With it's bright art and over-the-top escapades, Catch the Munchies! is a hilarious and delicious treat, launching a new series that's sure to be devoured by middle grade graphic novel readers, especially fans of Lunch Lady and Dog Man.
The youngest of 5 children, David Fremont grew up in Fremont, CA (true story), where he loved drawing while watching cartoons. He is now an animated content creator who most recently created web series for DreamWorks TV. When not pitching pilots, David teaches cartoon classes to kids.

"those who want their humor to have a fast and furious velocity should be right at home here . . . Like fast food, this is quick and goes down easy."—Kirkus Reviews