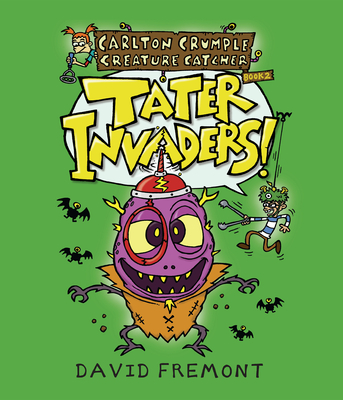 This is book number 2 in the Carlton Crumple Creature Catcher series.

Now that Carlton's an official Creature Catcher with the Shady Plains police department, he's on the hunt for a new monster.

While taking a snack break with his buddy and faithful assistant Lulu, suddenly one of their tater tots comes alive! And that little robot tot dude leads them to a whole underground world of evil potato creatures.

It's Carlton Crumple to the rescue, and he'll have to get to the root of the problem before everything becomes a mashed potato mess!

David Fremont bring even more rolling-on-the-floor humor and fast-food fun in the second installment in his bright and brilliant middle grade graphic novel series, which will especially appeal to fans of series like Lunch Lady and Dog Man.
The youngest of 5 children, David Fremont grew up in Fremont, CA (true story), where he loved drawing while watching cartoons. He is now an animated content creator who most recently created web series for DreamWorks TV. When not pitching pilots, David teaches cartoon classes to kids.

"The graphic novel format is used to great effect here to tell a rollicking tale. . . . The simple story and zany humor make this a fun and accessible comic adventure for even the most reluctant readers."—School Library Journal