A Way with Wild Things (Hardcover) 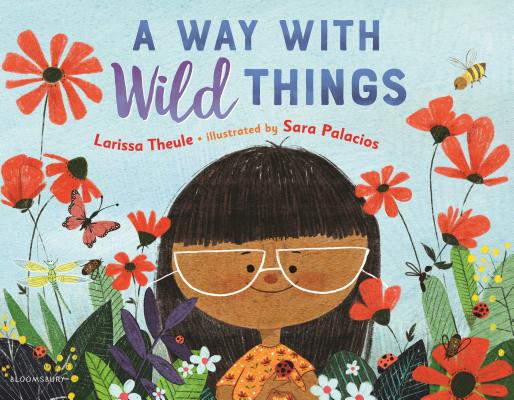 A Way with Wild Things (Hardcover)

Meet Poppy--if you can spot her among the wildflowers!

Poppy loves nature, and can be found carrying on conversations with ladybugs or singing with cicadas, but good luck spotting her indoors and around people! She's a master of camouflage, always finding a way to blend into her surroundings. Some might call her a wallflower.

At a party, Poppy stays out of sight. But when a very special bug lands on the cake, Poppy can't resist popping out to see it. Soon, the rest of the guests notice the beautiful dragonfly, and Poppy, too. Maybe she's not a wallflower after all, but a wildflower.

This poetic and evocative story celebrates the shy and introverted kids among us, as well as the other small creatures to be found if we look closely enough.

Sara Palacios was the recipient of the 2012 Pura Belpré Illustrator Honor Award for her work on Marisol McDonald Doesn’t Match. A native of Mexico, Sara graduated from the National Institute of Fine Arts in Mexico City and went on to earn BFA and MFA degrees in illustration from the Academy of Art University in San Francisco. She illustrates for companies in both the United States and Mexico.

“Theule's gentle storytelling reveals that what others may consider weaknesses, like Poppy's quiet and keen observation, may actually be our greatest strengths. Palacios' cheery illustrations are bright and playful but softly textured, a perfect match for our protagonist's bright-eyed yet introverted curiosity.” —Kirkus Reviews, starred review

“Palacios echoes the tenderness of the narration with a palette reminiscent of old-fashioned botanical prints.” —Publishers Weekly, starred review

“Theule tells an uplifting story for the more introverted and sensitive souls, illustrated by Palacios through vivid, colorful mixed media.…Perfect for youngsters who might need extra encouragement when speaking up or spending time in large groups.” —Booklist

“Young readers will be encouraged to explore nature and find their confidence in this lovely picture book.” —School Library Journal

“Palacios . . . decorates almost every spread with soft and warm-colored paintings.” —Kirkus Reviews on AGNES AND CLARABELLE

“The full-color illustrations, softly textured with colored pencil and watercolor washes and enhanced with crisp digital shapes, emphasize the antic energy of the pair, creating distinctly readable expressions through posture, beak, and snout.” —BCCB on AGNES AND CLARABELLE

“Beautifully illustrated. . . . Children will have fun identifying with Poppy as she progresses throughout the story.” —School Library Connection