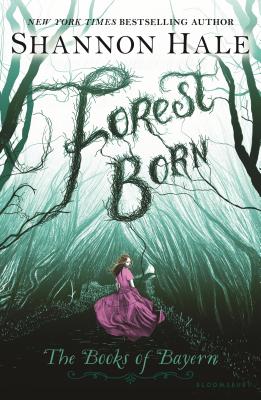 In this beloved fourth book in the Books of Bayern, from New York Times bestselling author Shannon Hale, Rin will leave the forest she loves behind to find herself.

Ever since her brother Razo introduced her to the trees, Rin has turned to them for peace or reassurance, even direction--that is, until the day they seem to reject her. Rin is sure something is wrong with her, something that is keeping her from feeling at home in the Foreat, from trusting herself with anyone at all.

Determined to find a new sense of self, Rin accompanies Razo into the city, where she discovers that a mysterious threat haunts Bayern. She joins with three magical girls--Isi, Enna, and Dasha--as they venture toward the kingdom of Kel . . . where someone wants them dead.

The fourth book in master storyteller Shannon Hale's beloved Books of Bayern series is equal parts fantastical and thrilling, with unforgettable characters to root for at its center.

"One doesn't need to have read the earlier books to become enraptured by this one, but doing so adds to the richness of these very satisfying tales." - Kirkus Reviews

"As usual, Hale's vivid, poetic language; romantic and action-filled plot twists; and friendship themes create a rich, satisfying read. But it's Rin's sensitively drawn struggle to recognize and accept her own power that will stay with readers most." - Booklist

"All is told in Hale's assured voice, drawing the details of her invented countries with precision and depth. Strong characters define the series. . . Newcomers will find this book an easy entry point, and fans will need no excuse to dive back into Hale's fantasy world." - The Horn Book

"Fans of the earlier titles as well as admirers of the genre will find Rin's journey a compelling read." - School Library Journal