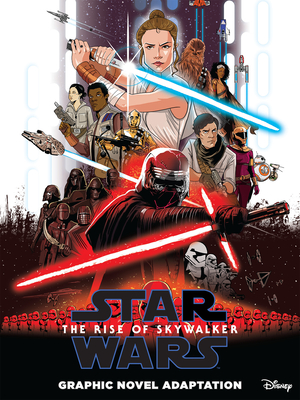 
Available to Order from Our Warehouse
The Rise of Skywalker is the newest Star Wars film to receive a graphic novel adaptation!

Faithfully bringing events from the film to the comics page, read along in The Rise of Skywalker as Poe faces the challenges of leadership, Finn and Rose make impossible decisions for the greater good, and Rey finally confronts her destiny. The true threat to the galaxy is revealed as the third Star Wars trilogy reaches its epic conclusion!

Will Rey join Kylo Ren to lead the First Order? Can Poe, Rose, and Finn inspire a new generation of rebels to combat this grave threat? With Snoke destroyed, can anything keep Kylo's rage in check?

Capturing the galaxy-spanning action of The Rise of Skywalker, experience the final chapter of the Skywalker Saga as a beautiful graphic novel combining the epic wonder of Star Wars with streamlined, young-reader friendly designs. This all-ages graphic novel is a must-read for longtime fans and a great introduction for young newcomers!
Alessandro Ferrari began writing comics for Disney after he attended a script-writing course at the Accademia Disney in Milan in 2005. He's written adventures for Mickey Mouse, Frozen, Pirates of the Caribbean, Witch, and High School Musical. He also adapted numerous films to the graphic novel format, including Wall E, Up, Alice in Wonderland, Frozen, Zootopia, and Finding Dory. Finally, he's written the most recent comic adaptations of the first seven Star Wars films.