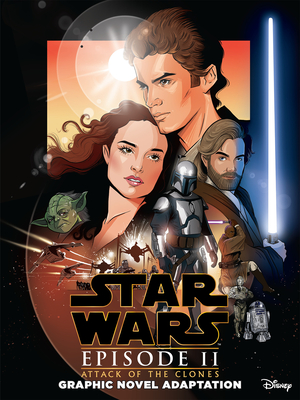 
Available to Order from Our Warehouse
Experience the excitement and thrill of the epic Star Wars movies in this young-reader friendly adaptation of Episode II!

In the midst of galactic unrest from the growing Seperatist movement, Jedi Master Obi-Wan Kenobi and his Padawan, Anakin Skywalker, are dispatched to protect Senator Padmé Amidala after a failed attempt on her life. What follows is a mission stretching to the farthest corners of the Outer Rim. Master and apprentice will discover a plot that threatens the entire Republic and see their loyalties--to the Jedi and each other--tested like never before. Can Anakin protect those he loves, and can Obi-Wan prevent the outbreak of all-out war?

Capturing the galaxy-spanning action of Attack of the Clones, experience Episode II as a beautiful graphic novel combining the epic wonder of Star Wars with streamlined, young-reader friendly designs. This all-ages graphic novel is a must-read for longtime fans and a great introduction for young newcomers!
Alessandro Ferrari began writing comics for Disney after he attended a script-writing course at the Accademia Disney in Milan in 2005. He's written adventures for Mickey Mouse, Frozen, Pirates of the Caribbean, Witch, and High School Musical. He also adapted numerous films to the graphic novel format, including Wall E, Up, Alice in Wonderland, Frozen, Zootopia, and Finding Dory. Finally, he's written the most recent comic adaptations of the first seven Star Wars films.