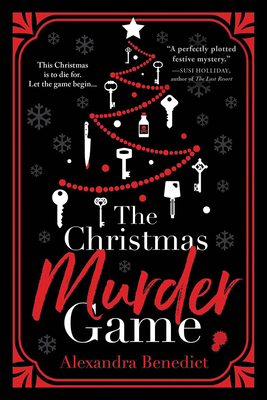 "Curl up by the fire (and lock all the doors) for this Christmas cracker of a book." —C.S. Green, author of Sleep Tight

Twelve clues. Twelve keys. Twelve days of Christmas. But how many will die before Twelfth Night?

The annual Christmas Game is afoot at Endgame House, the Armitages' grand family home. This year's prize is to die for—deeds to the house itself—but Lily Armitage has no intention of returning. She hasn't been back to Endgame since her mother died, twenty-one years ago, and she has no intention of claiming the house that haunts her dreams.

Until, that is, she receives a letter from her aunt promising that the game's riddles will give her the keys not only to Endgame, but to its darkest secrets, including the identity of her mother's murderer.

Now, Lily must compete with her estranged cousins for the twelve days of Christmas. The snow is thick, the phone lines are down, and no one is getting in or out. Lily will have to keep her wits about her, because not everyone is playing fair, and there's no telling how many will die before the winner is declared.

Including additional scavenger hunts for the reader, this clever murder mystery is the perfect gift for fans of classic mysteries, festive Christmas books, and armchair detective work.

Alexandra Benedict studied English at Cambridge and creative writing at Sussex. As A.K. Benedict, she published the critically acclaimed THE BEAUTY OF MURDER and THE EVIDENCE OF GHOSTS. She has composed film and television soundtracks and performed as a musician before becoming a full-time writer in 2012.

"There’s love trapped in this house too, and the word puzzles posed to the family (and anagrams listed in the foreword for readers to solve as they read the book) provide an intriguing and engrossing way to get to that warmth. Just the ticket for next winter." — First Clue

"Curl up by the fire (and lock all the doors) for this Christmas cracker of a book." — C.S. Green, author of Sleep Tight

"The perfect Christmas read . . . and puzzles galore for both readers and the players of the game." — W.C. Ryan, author of A House of Ghosts