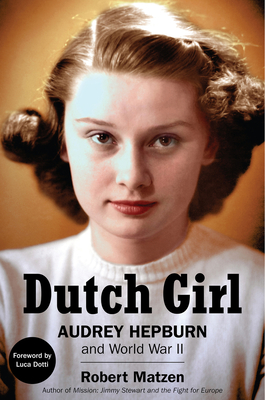 
NOT AVAILABLE
Twenty-five years after her passing, Audrey Hepburn remains the most beloved of all Hollywood stars, known as much for her role as UNICEF ambassador as for films like Roman Holiday and Breakfast at Tiffany’s. Several biographies have chronicled her stardom, but none has covered her intense experiences through five years of Nazi occupation in the Netherlands. According to her son, Luca Dotti, “The war made my mother who she was.” Audrey Hepburn’s war included participation in the Dutch Resistance, working as a doctor’s assistant during the “Bridge Too Far” battle of Arnhem, the brutal execution of her uncle, and the ordeal of the Hunger Winter of 1944. She also had to contend with the fact that her father was a Nazi agent and her mother was pro-Nazi for the first two years of the occupation. But the war years also brought triumphs as Audrey became Arnhem’s most famous young ballerina. Audrey’s own reminiscences, new interviews with people who knew her in the war, wartime diaries, and research in classified Dutch archives shed light on the riveting, untold story of Audrey Hepburn under fire in World War II. Also included is a section of color and black-and-white photos. Many of these images are from Audrey’s personal collection and are published here for the first time.
Robert Matzen is the award-winning author of Mission: Jimmy Stewart and the Fight for Europe, Fireball: Carole Lombard and the Mystery of Flight 3, and five other books. He has appeared on national broadcast programs and his byline has appeared in the Wall Street Journal among other publications. Luca Dotti is the younger son of Audrey Hepburn and New York Times bestselling author of Audrey at Home. He is a former graphic designer and now chairs the Audrey Hepburn Children's Fund. Created by Audrey's family in 1994, the Fund helps children in need around the world.
"Dutch Girl may be one of the best books about Audrey Hepburn ever written. It offers the reader, the historian, the film buff an insight and understanding as to what made Hepburn the star, the actress, the humanitarian—the very woman whom the world to this day warmly remembers with love and admiration. Dutch Girl is a must read."  —Stephen Michael Shearer, author, Beautiful: The Life of Hedy Lamarr

“What many don’t know, and Robert Matzen’s sensitive and deeply moving book reveals, are Hepburn’s experiences growing up in the Netherlands during the years of Nazi occupation—experiences that formed her character and left her haunted by memories she could not erase. A master storyteller, Matzen has given us a great story—intimate, intense, and unforgettable—that carries us not only into the heart of battle but into the heart of a great human being.”  —Foreword Reviews

"Beloved by millions even today, Audrey Hepburn is known for her performances in 'Breakfast at Tiffany's' and many other movies. Less known is her active role in the Dutch resistance in World War Two despite the Nazi sympathies of her parents. This promises to be one of the most riveting and enlightening books of 2019." —Top 20 list, http://ww2reads.com

"A well written, exhaustively researched and totally absorbing book that reveals never-known facts about the past, the origins and the early experiences of one of the world's most cherished icons. This is a story of danger, suspense and determination to succeed against terrible odds, told in Technicolor." —Rex Reed, film critic, author, and writer for the New York Observer

"In Dutch Girl: Audrey Hepburn and World War II, Robert Matzen maintains that his subject’s formative experiences provide the key to unlocking her intensely private personality. Drawing upon meticulous research, Mr. Matzen delivers a vivid, moving and persuasive account of a harrowing time that the actress seldom discussed in detail and which has been glossed over or sensationalized by frustrated biographers." —Stephen Brumwell, Wall Street Journal

"Among the harrowing and tragic incidents shared in the new book include details about her participation in the Dutch Resistance, working as a doctor’s assistant during the battle of Arnhem, the execution of her uncle, and the Dutch famine of 1944 and 1945." —Fortune.com

"A meticulously detailed and researched look at the formative years of an iconic performer; for fans of Hepburn as well as anyone seeking a social history of the Dutch experience of World War II." —bookverdict.com

"[Dutch Girl] offers a wonderfully complete and revealing character sketch of an individual who continues to fascinate millions around the world. Hepburn was, of course, gracious, talented, and elegant. But Matzen makes clear that she also was extraordinarily courageous... This entertaining and enlightening book adds another dimension to the legend of Audrey Hepburn." —Terry Hartle, Christian Science Monitor

"Audrey Hepburn, the Hollywood actress who was celebrated for her portrayals of princesses ("Roman Holiday") and glamour girls ("Sabrina," and "Breakfast at Tiffany’s") and later for her work as a UNICEF ambassador before her death from cancer in 1993, had a secret past as an anti-Nazi fighter, according to a new book. Robert Matzen’s recently published Dutch Girl: Audrey Hepburn and World War II explores how her sometimes perilous wartime experiences helped her grow into a strong woman who always fought hard for her beliefs. The book features never-before-published archival photographs, diaries and other records that add a new chapter to the story of a woman who was beloved by so many." —Hannah Brown, Jerusalem Post