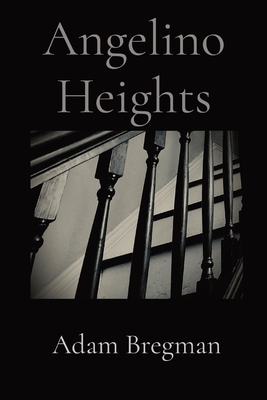 
Available to Order from Our Warehouse
This book cannot be returned
When Dalton Everest, a naive school teacher with a crackerjack, free-form way of expressing himself, forms a fast friendship with Nathan Lyme, a charmer who's cagey about his employment, everything Dalton knew of his previous life is swiftly upended. Set up by Nathan to fall hard for Melanee, a frequently drunk French girl and former purse snatcher, Dalton ends up in a pickle and then, paranoid out of his wits, is ultimately chased through the streets of downtown L.A. Angelino Heights is a crime novel obsessed with Los Angeles. It traipses across the city from a crooked pawn shop in Cudahy to a secretive mecca of modernism protruding from a hill in Pasadena to the old timey dive and themed bars, where its protagonists drink up the atmosphere of old L.A.

Adam Bregman has spent an inordinate amount of time wandering around Los Angeles, where he was born and ran for mayor in 1993. He has written extensively for the L.A. Times and L.A. Weekly, covering every aspect of the city. He has also contributed to more than 40 publications including The Stranger, San Francisco Chronicle, Boston Phoenix and OC Weekly.
"If Charles Portis ("America's greatest, least-known writer," according to Roy Blount, Jr.) had written a post-modern film noir screenplay set in Los Angeles in the late 1990s, then adapted it into a novel, it would look and sound and smell a lot like Angelino Heights, by author Adam Bregman. The story pairs two unlikely characters engaged in a low-grade, unlikely crime spree. Dalton Everest, a vacuously unsatisfied high school teacher and lounge lizard, is seduced into a life of half-assed burglaries by Nathan Lyme, a handsome, soulless con, who fancies himself...something. The problem is that Nathan can't decide on what that something is, and before long he and Dalton pass a point of no return, almost indifferently. Bregman manages to capture the insalubrious, ignored vein of L.A. life that runs inconspicuously under our noses, hiding in plain sight. It's a world of people making just enough bad decisions to give readers a sinking, hopeless feeling. His dialogue captures the confusion and contraption of artifice slung about between people trying to tap into something that will give their lives meaning. Angelino Heights is a tour through L.A. in the wake of Dalton and Nathan, whose destinies seem more an afterthought than a conclusion. And all the while the city beats out a tattoo in the background, cool and slow, narrow and hard to master." - Shawn Kerivan, author of Name the Boy and Iago's Fool.

"Adam Bregman's Angelino Heights, steered by two twentysomethings, thrills and mystifies, as Nathan (the worldly, streetwise, though likable, protagonist) winds us through known and unknown parts of Los Angeles with his new, naive and reluctant teacher-friend, Dalton, causing dread in the reader and in Dalton over the arrival of expectant comeuppance. Will they or won't they? is the main question that propels the novel. Good detail and a fine sense of place make this novel a fun read." - Montserrat Fontes, author of First Confession and Dreams of the Centaur.