A Prince Among Dragons (Paperback) 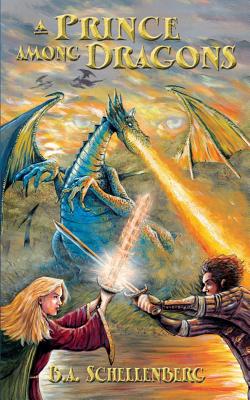 A Prince Among Dragons (Paperback)

By B. a. Schellenberg, Chris Hamilton (Cover Design by), Emma Grace Schellenberg (Editor)

A Prince Among Dragons is a historical fantasy novel set in medieval Wales. Prince John despises his living situation in Ruthin Castle. Placed in a foster family, John is mercilessly taunted and belittled by his cruel brother, Aldric Grey. John's father, King Edward Plantagenet, is so caught up in his own ambitions that he rarely visits his son. John longs to escape Ruthin Castle and somehow prove that he is an able swordsman and the worthy firstborn prince of England. By the River Clywd, Sorceror Simeon turns John into a dragon. Flying to the dragon gathering, John befriends Oswin, a fellow dragon, and learns such dragon warfare skills as aeronautics, shape-shifting, and riddling. As time passes, John loses his grasp on humanity and embraces his dragon nature. With very little sense of his own humanity remaining, John is called to return to his beloved River Clywd by Ruthin Castle to await the pendragon's call to war against the king, John's father.

The story also features Annabelle, John's childhood friend. Both Annabelle and her mother have the gift of sixth sense, "the sight." When John disappears, Annabelle realizes she must go to Gweryd Lake of the Gwragedd Annwyn, the water sprites, to retrieve her dead father's sword. Leaving her mother to fend for herself, Annabelle searches for the lake she and her mother travelled to when Annabelle was a child. There, they left her father's magic sword to the lady of the lake.

Aldric follows her to the world beneath the lake, intending to steal the magic sword. They are transported to the world of undersea gardens and water-domed homes, where Aldric disobeys the laws of the sprites and steals a flowering alderberry tree branch.

Eventually returning to Ruthin castle to find answers, Annabelle rushes to her secret place by the River Clywd to consider her few remaining options. Aldric finds her and when he attempts to force her hand in marriage, she draws her father's sword. John awakens to their fighting and rises up as a glorious dragon. John, his humanity all but gone and Annabelle stand in the final confrontation--a dragon and a girl with a magic sword.