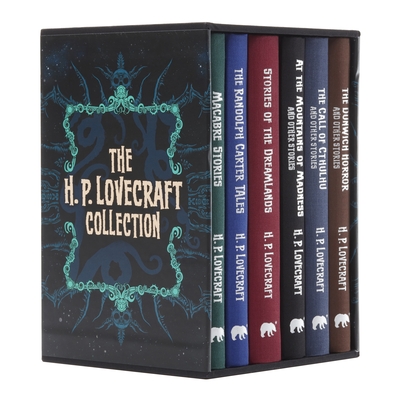 Said to be inspired by his own nightmares, Lovecraft's writing astounds and terrifies in equal measure. His fiction marry gothic horror with cosmic fantasy, from his early macabre stories to his tales of the dreamlands, and of course, his famous Cthulhu novellas, and have influenced authors from Stephen King to Neil Gaiman. With contemporary embossed cover-designs, matching color endsheets and a hardcover slipcase, these complete and unabridged tales make the perfect gift or collectible for any fan of the weird and wonderful. Includes:
- At the Mountains of Madness
- The Dunwich Horror
- The Call of the Cthulhu
- The Shadow over Innsmouth
- Polaris
- The Colour Out of Space
- Rats in the Walls ABOUT THE SERIES: The Arcturus Collector's Classics series are high-quality, clothbound box-sets of classic works of literature. With elegant embossed cover-designs and colored endpapers, these editions make wonderful gifts or collectibles to treasure forever.
H. P. Lovecraft was born in Providence, Rhode Island, in the US in 1890. Influenced by various literary interests, from the Tales of Arabian Nights, to Greek mythology and to 19th century Gothic tales told to him by his grandfather, Lovecraft mixed these together with an interest in science. From this background, he gave voice to his ideas in a series of dark tales of fantasy and horror. He suffered from ill health, at one point having a nervous breakdown, and he was unable to attend university, which was a huge disappointment to him. He died in 1937, but his legacy lives on in a body of work that has inspired countless films, TV series, board games and toys, as well as the work of many other writers.