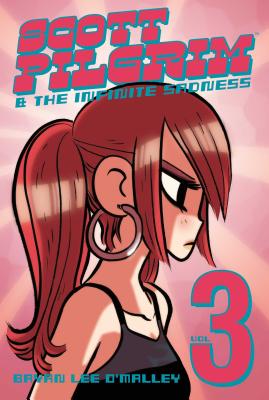 This is book number 3 in the Scott Pilgrim series.

Ramona's third evil ex-boyfriend, Todd Ingram, is currently dating the former love of Scott Pilgrim's life! Envy Adams broke Scott's heart a year and a half ago. Now she and her evil art-rock band are back, and they're getting Scott's band to open a show two days from now! That's just enough time for Scott to fight Todd, keep Ramona happy, fend off demented ex-girlfriends, and practice that new setlist. Right?? Don't miss the latest chapter in the graphic novel saga The Globe and Mail calls "Canada's answer to Tank Girl!"
Bryan Lee O'Malley is a Canadian cartoonist best known for the bestselling, award-winning Oni Press series "Scott Pilgrim" (2004-2010). "Scott Pilgrim" was adapted into a critically-acclaimed major motion picture (from Universal) and video game (from Ubisoft) in 2010. O'Malley lives in Los Angeles, where he continues to make comics.

Fun stories for those just learning how to read. Though I love the book, I can't guarantee I will sit still long enough to listen. There is just so much to explore.