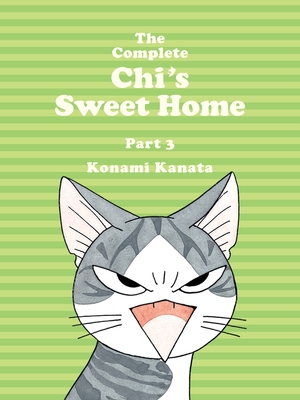 
Available to Order from Our Warehouse
Now collected in a larger three-volume omnibus Konami Kanata's Chi's Sweet Home is once again shattering all expectations and taking the comics industry by storm. This time The Complete Chi collects volumes seven through nine along with two more comics from Konami Kanata's FukuFuku: Kitten Tales series.

Volume 3 also contains a special comic announcing the launch of the new Chi's Sweet Home anime!
Konami Kanata was born on July 3, 1958, in Nagano, Japan. A veteran manga artist Konami made her professional debut in 1982 with the serialized comic Petit Cat Jam-Jam for Kodansha's seminal shoujo manga magazine NakaYoshi. The daughter of an elementary school teacher, most of Konami's stories are for readers of all ages making her one of the most accessible artists in recent history.

In her nearly thirty year career, Konami has penned more than a dozen comic series, with the majority of them focusing on cats and pets. Konami is well regarded within the pet-manga community for her keen sense of cat ecology. Her ability to observe and render feline behavior has earned her respect from the Japanese manga community as a whole. While most of her properties were published for a younger female demographic, her most recent series Chi's Sweet Home is currently being published by Kodansha's Morning magazine—Japan's leading comic magazine for adult readers—proving that quality can be found even in the cutest of sources. Chi's Sweet Home will be Konami's first translated work.