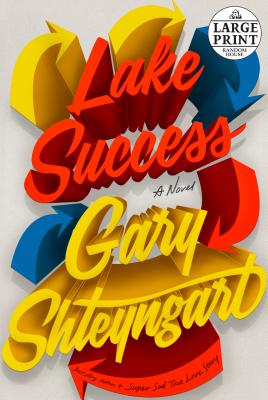 “When Barry Cohen’s marriage and hedge fund company begin to crumble, he hops a Greyhound bus to El Paso, hoping to find himself among the ‘real Americans’ of the Trump era. Meanwhile, the wife he left behind struggles to build a solo life among the one percent. Together, their stories are a biting portrait of a country unimproved by the best of intentions. Equal parts Sense and Sensibility, A Confederacy of Dunces, and Bonfire of the Vanities, Lake Success is a wickedly funny satire and a rollicking good story for tough times.”
— David Enyeart, Common Good Books, St. Paul, MN

The bestselling author of Super Sad True Love Story returns with a biting, brilliant, emotionally resonant novel very much of our times.


Narcissistic, hilariously self-deluded, and divorced from the real world as most of us know it, hedge-fund manager Barry Cohen oversees $2.4 billion in assets. Deeply stressed by an SEC investigation and by his three-year-old son’s diagnosis of autism, he flees New York on a Greyhound bus in search of a simpler, more romantic life with his old college sweetheart. Meanwhile, his super-smart wife, Seema—a driven first-generation American who craved the picture-perfect life that comes with wealth—has her own demons to face. How these two flawed characters navigate the Shteyngartian chaos of their own making is at the heart of this piercing exploration, a poignant tale of familial longing and an unsentimental ode to America.

LONGLISTED FOR THE CARNEGIE MEDAL FOR EXCELLENCE IN FICTION

“The fuel and oxygen of immigrant literature—movement, exile, nostalgia, cultural disorientation—are what fire the pistons of this trenchant and panoramic novel. . . . [It is] a novel so pungent, so frisky and so intent on probing the dissonances and delusions—both individual and collective—that grip this strange land getting stranger.”—The New York Times Book Review

“Shteyngart, perhaps more than any American writer of his generation, is a natural. He is light, stinging, insolent and melancholy. . . . The wit and the immigrant’s sense of heartbreak—he was born in Russia—just seem to pour from him. The idea of riding along behind Shteyngart as he glides across America in the early age of Trump is a propitious one. He doesn’t disappoint.”—The New York Times

Gary Shteyngart is the New York Times bestselling author of the memoir Little Failure (a National Book Critics Circle Award finalist) and the novels Super Sad True Love Story (winner of the Bollinger Everyman Wodehouse Prize), Absurdistan, and The Russian Debutante’s Handbook (winner of the Stephen Crane Award for First Fiction and the National Jewish Book Award for Fiction). His books regularly appear on best-of lists around the world and have been published in thirty countries.

“This is a novel that seems to have been created in real time, reflecting with perfect comedy and horrible tragedy exactly what America feels like right this minute. As I read Lake Success, I barked with laughter, at the same time wincing in pain. Gary Shteyngart has held up a mirror to American culture that is so accurate, and so devastating, that it makes you want to break the mirror right over your own head. I mean this as a good thing. The novel is stupendous.”—Elizabeth Gilbert

“The fuel and oxygen of immigrant literature—movement, exile, nostalgia, cultural disorientation—are what fire the pistons of this trenchant and panoramic novel. . . . Chief among this novel’s pleasures is viewing the nation—its landscapes, its people, its curdled politics, its increasingly feudal inequalities—through the vibrant filters of Shteyngart’s Hipstamatic mind. . . . [It is] a novel so pungent, so frisky and so intent on probing the dissonances and delusions—both individual and collective—that grip this strange land getting stranger.”—The New York Times Book Review

“A novel in which comedy and pathos are exquisitely balanced . . . timely but not fleeting. Its bold ambition to capture the nation and the era is enriched by its shrewd attention to the challenges and sorrows of parenthood. Barry Cohen, the glad-handing protagonist, repels our sympathy while laying claim to it. . . . There’s something uncanny about Shteyngart’s ability to inhabit this man’s boundless confidence, his neediness, his juvenile tendency to fall in love and imagine everyone as a life-changing friend. . . . [This is also] one of the most heartbreaking novels I’ve read about raising a child with special needs.”—The Washington Post

“[A] spectacular, sprawling new novel . . . Throughout his career, Shteyngart has proven himself a cheeky comic daredevil, but never more so than in this novel. . . . An artistic tour de force.”—Maureen Corrigan, NPR

“Shteyngart, perhaps more than any American writer of his generation, is a natural. He is light, stinging, insolent and melancholy. . . . The wit and the immigrant’s sense of heartbreak—he was born in Russia—just seem to pour from him. The idea of riding along behind Shteyngart as he glides across America in the early age of Trump is a propitious one. He doesn’t disappoint.”—The New York Times

“From one of our finest comic novelists comes a work with equal parts smarts and heart to go with the steady hilarity of its plot and prose. . . . Surely the funniest book of the year, indeed one of the best overall.”—Newsday

“Lake Success is a big-hearted book about many things. It’s a brilliant satire of hedge fund managers, their trophy wives and gaudy apartments; a heart-rending but ultimately hopeful account of raising a child on the spectrum; and a raucous celebration of racial, ethnic and gender identity in America today.”—Associated Press

“The multiple-time-New-York-Times-bestselling author has written several tomes that hit the perfect note of very funny and very true, and he continues that pattern in Lake Success.”—Entertainment Weekly

“A darkly comic journey to the heart of Donald Trump–era America, one that explores the wages of narcissism, skewers the excesses of the ultrarich, and ultimately probes the hope that we may find ways to get beyond our starkly defined differences and be better to one another.”—The Atlantic

“Shteyngart sets up [Barry] Cohen’s dilemma beautifully, and the scenes of Cohen’s travels contain gorgeous writing. . . . It is in these scenes that Lake Success is at its most powerful and offers the most pointed observations of present-day America. . . . An apt work for this strange era in American history.”—Houston Chronicle

“What if the central character of Jack Kerouac’s On the Road was an unraveling hedge-fund manager on the lam in the era of Donald Trump? Cue Gary Shteyngart’s new novel, Lake Success. It’s a morality tale-meets-road trip that any ardent reader—though perhaps not subject—of today’s financial headlines will appreciate.”—Reuters

“Guys like Barry are always going to be OK, saved by their money and privilege. Shteyngart is careful not to make Barry a black hat—his interactions with his autistic son are compassionately rendered, and Barry is more dim than craven. But a nice guy who does not-nice work serves as a warning as well as a punch line.” —Minneapolis StarTribune

“Lake Success is often satiric, deploying the same sharp skills as Shteyngart’s earlier novels . . . a cool control of tone, a Tom Wolfe–level eye for status markers, a knack for making the outrageous sound all too plausible. But Lake Success has depths. Barry might be the oblivious poster boy for white male privilege, but Shteyngart makes us feel for the people around him.”—Tampa Bay Times

“It begins with the ultimate incongruity. . . . Shteyngart’s gift for such contrasts combined with his astute eye for the nuances of American life and a poignant sense of humor make him an ideal author to tackle the onset of the Trump era, when it often felt as if Americans occupied two antithetical realities.”—AM New York

“An ambitious state-of-the-nation novel about the miasma of discontents that produced the astonishing election result of 2016 . . . Lake Success is spiky, timely and true.”—The Guardian

“Lake Success is a genial and warm-hearted book. . . . A virtuoso piece of work, full of brilliant noticings . . . It’s also, remarkably, an unhysterical novel about a hysterical country at a hysterical time—the work of a novelist who believes in the power of fiction to illuminate our shared world.”—Literary Review

“[Barry Cohen’s] journey across America, relearning how real people talk and how the country works, is ironic, hilarious, infuriating and strangely touching. . . . Barry is a complex, well-realised character. . . . Funny, cutting, but above all compassionate.”—The Herald

“Lake Success is undeniably enjoyable, rattling along with good jokes and sharp set pieces, and shot through with Shteyngart’s good-natured melancholy.”—The Times (UK)