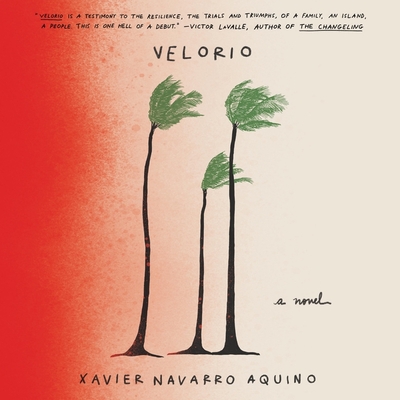 Set in the wake of Hurricane Maria, Xavier Navarro Aquino's unforgettable debut novel follows a remarkable group of survivors searching for hope on an island torn apart by both natural disaster and human violence. Camila is haunted by the death of her sister, Marisol, who was caught by a mudslide during the hurac n. Unable to part with Marisol, Camila carries her through town, past the churchyard, and, eventually, to the supposed utopia of Memoria.

Urayo n, the idealistic, yet troubled cult leader of Memoria, has a vision for this new society, one that in his eyes is peaceful and democratic. The paradise he preaches lures in the young, including Bayfish, a boy on the cusp of manhood, and Morivivi, a woman whose outward toughness belies an inner tenderness for her friends. But as the different members of Memoria navigate Urayo n's fiery rise, they will need to confront his violent authoritarian impulses in order to find a way to reclaim their home.

Velorio--meaning wake--is a story of strength, resilience, and hope; a tale of peril and possibility buoyed by the deeply held belief in a people's ability to unite against those corrupted by power.