Dan Rather, journalist and author of What Unites Us for an Indies First event 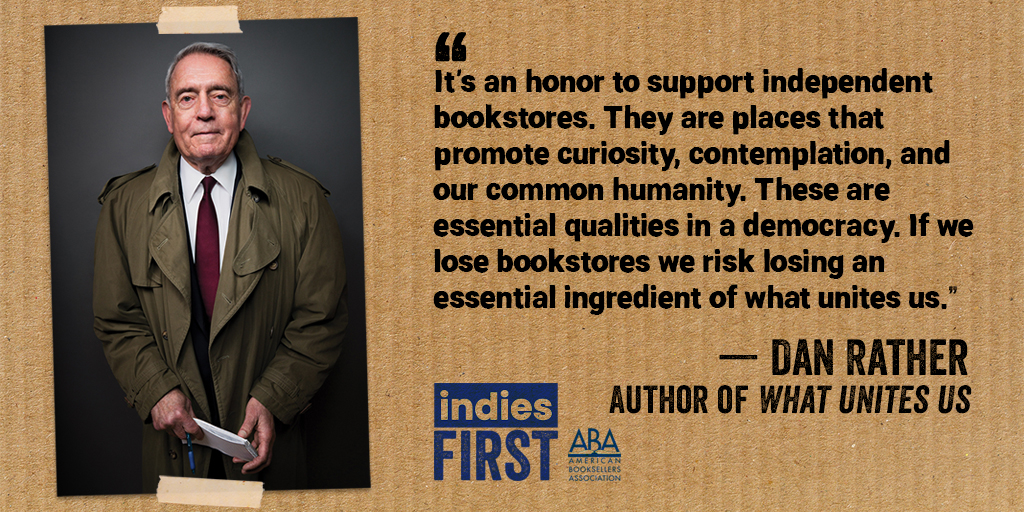 Join Dan Rather for a discussion on his book What Unites Us: Reflections on Patriotism and the importance of indie bookstores!. Order What Unites Us and register for the virtual event below.

Order What Unites Us

About the book: At a moment of crisis over our national identity, revered journalist Rather has been reflecting--and writing passionately almost every day on social media--about the world we live in, what our core ideals have been and should be, and what it means to be an American.

About the author: With a storied career that has spanned more than six decades, Dan Rather is one of the world's best-known journalists. He has interviewed every president since Eisenhower and covered almost every important dateline around the world. Rather joined CBS News in 1962, and in 1981 he assumed the position of Anchor and Managing Editor of the CBS Evening News, which he held for twenty-four years. His reporting helped turn 60 Minutes into an institution, launched 48 Hours as a newsmagazine program, and shaped countless specials and documentaries. Upon leaving CBS, Rather created the Emmy Award-winning Dan Rather Reports on HDNet. He is founder, president, and CEO of News and Guts, an independent production company that specializes in high-quality nonfiction content across a range of traditional and digital channels.

Elliot Kirschner is an Emmy Award-winning journalist and filmmaker. After a career at CBS, producing for the CBS Evening News, CBS Sunday Morning, and 60 Minutes II, Kirschner joined his longtime collaborator Dan Rather as the senior producer for Dan Rather Reports. He now develops film, television, and digital projects. A graduate of Harvard, Kirschner lives with his family in San Francisco, where he is building an innovative venture in science communication.

Register in advance for the event:
https://www.eventbrite.com/e/dan-rather-what-unites-us-tickets-129594840657

What Unites Us: Reflections on Patriotism (Paperback)