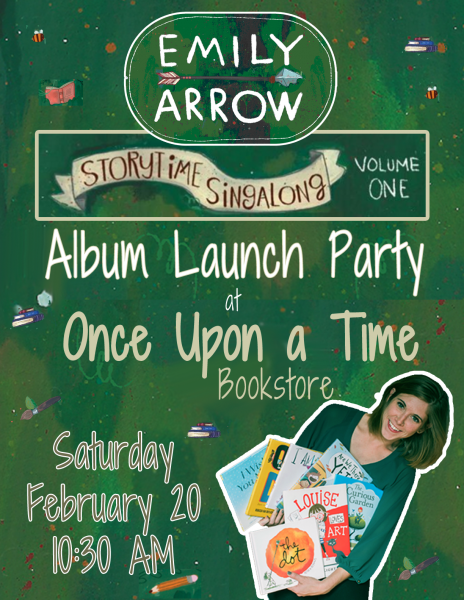 Adapting picture book gems such as CURIOUS GARDEN(Peter Brown), LOUISE LOVES ART!(Kelly Light) and ARE WE THERE, YETI?(Ashlyn Anstee) (among many others), Emily weaves her whimsical, bouncy music to delight and entertain kids of all ages.

“Make, make, make a mark.  All you gotta do is start.”*  Singer-songwriter Emily Arrow is making her mark in the children’s music industry the best way she knows how, having turned her appreciation and love for singing, children's stories and art into a new kids' music genre - KidLit  Tunes  - launching with a new series - Storytime Singalong. The charming album,
Emily Arrow: Storytime Singalong Volume I is the first title in the series, which will be available on CD February 19, 2016 from Burnside Distribution.

Winner of the 2015 John Lennon Songwriting Competition for her children's song "The Curious Garden" inspired by Peter Brown's book, which is included on Storytime Singalong Volume I, the Ohio-born, music teacher-turned-songwriter's original, whimsical songs are influenced by popular children’s books and are adored by kids, parents and teachers alike.  Also included on the CD is "The Dot Song," which is played on International Dot Day (mid-September) inspired by the classic Peter H. Reynolds storybook The Dot. Available in English and many other
languages, the book shares the story of a girl who begins a journey of self-discovery after a caring teacher challenges her to "make her mark."

"To me, picture books have an inherent tune, tone, and rhythm," says Arrow, creator of KidLit  Tunes, a new children's music genre. "During my time as an elementary music teacher, I used books in my classroom often. Each one invoked such a musical response in me that I began writing songs about my favorite stories. I love weaving each book's narrative into a rhymed, interactive song and I use the illustrations as inspiration for the chords and sound palette.""With Storytime Singalong I created 'sing-along' songs that encourage kids, parents, teachers, caregivers, and librarians to enjoy together -- through the language of music, the power of words and the beauty and art of book illustrations."

Emily is a graduate of Berklee College of Music in Boston and earned her graduate-level teaching certification in Orff-Shulwerk Levels I & II. Following her studies, Emily became a K-6 music teacher at a performing arts-based private elementary school in Los Angeles. During her time teaching, she found that her passion was collaborating with the library, art and technology departments, which led her to her launching  KidLit Tunes combining her love of reading, song writing and performing.

Storytime Singalong Volume I is Emily's debut album in her self-created genre - KidLit Tunes. The songs can be played along with correlating books, creating a truly unique and delightful family or in-school experience. Each tune features simple follow-along lyrics based on bright, bold storybooks,which will entrance even the youngest of listeners and early readers.

Of the eleven songs on the CD, seven songs are inspired by books like The Dot Song by Peter H.Reynolds, Louise Loves Art by Kelly Light , The Curious Garden by Peter Brown, Are We There Yet, Yeti? by Ashlyn Anstee,  I Am Yoga, by Susan Verde with illustrations by Peter H. Reynolds, One Day, the End by Rebecca Kai Dotlich, with illustrations by Fred Koehler and I Wish You More by Amy Krouse Four  original tunes by Emily are "Books! Books!,"  "Poem In Your Pocket," “Peanut To My Butter”(“You’re the peanut to my butter, the bumble to my bee … the sprinkles on my cupcake … that’s what you are to me.”) and “Follow Your Arrow.”

Recommended for ages 2-10, Storytime Singalong Volume I is produced by Nick Goldston, who alsoprovided instrumentation, arranging and background vocals.  The album cover features artwork byauthor/illustrator Ashlyn Anstee.  The CD will be available in stores February 19, 2016 for a SRP of $12.99, and  online outlets. 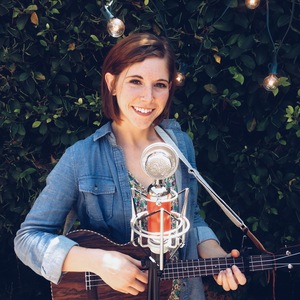 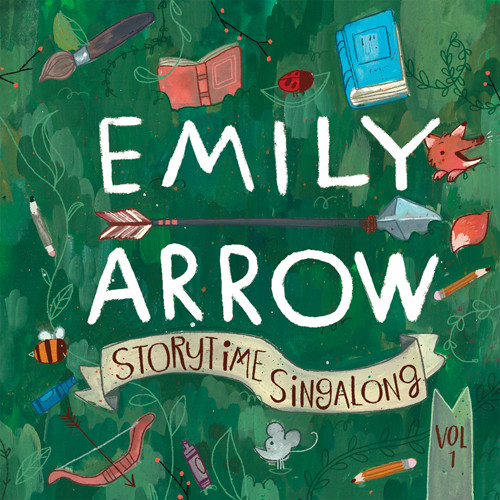 Are We There, Yeti? (Hardcover)

I Wish You More (Encouragement Gifts for Kids, Uplifting Books for Graduation) (Hardcover)

I Am Yoga (I Am Books) (Hardcover)