Award winning author David A. Robertson will be visiting Laurence school virtually with Once Upon A Time. If you would like a book with signed book plate, please order by Wednesday, October 10th.

About The Barren Grounds (The Misewa Saga #1):

Morgan and Eli, two Indigenous children forced away from their families and communities, are brought together in a foster home in Winnipeg, Manitoba. They each feel disconnected, from their culture and each other, and struggle to fit in at school and at their new home -- until they find a secret place, walled off in an unfinished attic bedroom. A portal opens to another reality, Askí, bringing them onto frozen, barren grounds, where they meet Ochek (Fisher). The only hunter supporting his starving community, Misewa, Ochek welcomes the human children, teaching them traditional ways to survive. But as the need for food becomes desperate, they embark on a dangerous mission. Accompanied by Arik, a sassy Squirrel they catch stealing from the trapline, they try to save Misewa before the icy grip of winter freezes everything -- including them. 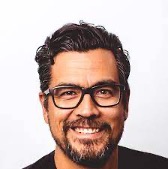 About the author: DAVID A. ROBERTSON (he, him, his) is the 2021 recipient of the Writers’ Union of Canada Freedom to Read Award. He is the author of numerous books for young readers including When We Were Alone, which won the 2017 Governor General's Literary Award. The Barren Grounds, the first book in the middle-grade The Misewa Saga series, received a starred review from Kirkus, was a Kirkus and Quill & Quire best middle-grade book of 2020.His second picture book, On The Trapline, illustrated by Julie Flett, has received starred reviews from Kirkus Reviews and Publisher’s Weekly. Dave is also the writer and host of the podcast Kíwew, winner of the 2021 RTDNA Prairie Region Award for Best Podcast. He is a member of Norway House Cree Nation and currently lives in Winnipeg.

The Barren Grounds: The Misewa Saga, Book One (Hardcover)

On the Trapline (Hardcover)