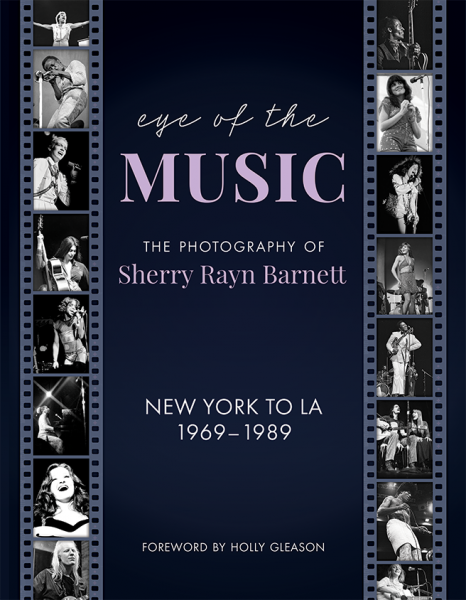 Join trailblazing photographer Sherry Rayn Barnett in conversation with music journalist Holly Gleason as they discuss  iconic music legends seen through Barnett's camera lens. Order a signed copy of Sherry's new book Eye of the Music: The Photography of Sherry Rayn Barnett and register for the Zoom event below.

Order a signed Eye of the Music

About the book: Sherry Rayn Barnett has been in the Eye of the Music since capturing, almost stealing, the most white-hot seconds onstage, the unguarded intimacies and the bolt of creativity, whether in the studio or at home.

Beginning in New York City as a teenager, Sherry chronicled the artists redefining what pop music was as the ‘60s gave way to the ‘70s for various underground magazines. Early iconic photographs of Tina Turner, Joni Mitchell, James Taylor, and Laura Nyro created trust and opened doors for revelatory images of Janis Joplin and Bonnie Raitt.

By the time she arrived in Los Angeles, the Troubadour scene was full-force. Sherry, who plays a blue Fender Stratocaster, was on the frontlines of the rock, pop, folk and Laurel Canyon country-rock scenes—as much a fellow musician as a photographer documenting the music. Disappearing into the music, she caught a young Linda Ronstadt, an almost hippie angel Emmylou Harris, the already prolific Jackson Browne, and pop superstars the Carpenters before seeing the punk upheaval deliver the Go-Go’s, Prince, and the Eurythmics.

Barnett’s gift is her ability to feel her surroundings, to recognize the perfect moments and create images that offer the essence of the artists she encounters. Again and again, she was there. Linda Ronstadt, Roy Orbison and k.d. lang, Nina Simone, Judy Collins all saw their best, most incandescent selves delivered through the lens of Sherry’s camera.

Now, for the first time, here is a comprehensive collection of all the images, all the moments, all the schools of music that have been part of the first two decades of one of the most far-reaching careers in modern rock photography. To Sherry, it’s being where the truth meets the players; for the rest of us, it’s a reason to celebrate how good music transforms everything. Exhaustively documenting the stars who marked generations, Eye of the Music offers a profound look into why some artists last—and some moments matter. 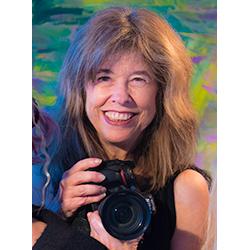 About the author/photographer: Sherry Rayn Barnett is a widely published music photographer, specializing in live performances.  She began her career in NYC shooting for the underground press, focusing on the folk, jazz, and rock musicians of the early ‘70s. Her work has been seen in countless music magazines over the decades, including Rolling Stone, Creem, Guitar Player, Crawdaddy, Goldmine, Acoustic Guitar, Forbes, W Magazine, and Fretboard Journal. Recent music biographies feature her photos, including “Little Girl Blue – The Karen Carpenter Story,” “Joni Mitchell, In Her Own Words,” Etta James’ “Rage To Live,” and Nina Simone’s “I Put A Spell on You.” Clients have included C.F. Martin Guitars, Sony, Verve/Polygram, Warner Bros., and the famed UK-based TV show, “Top of the Pops.” Iconic artists such as Charlie Haden, Nina Simone, Mary Chapin Carpenter, Etta James, and The Manhattan Transfer have used her photography for promotion, CDs, documentaries, and books.

Sherry’s archives span 40+ years, documenting a “who’s who” of pop music from legends like Janis Joplin, BB King, and Tina Turner to contemporary favorites in rock, folk, jazz, blues and country. Currently based in L.A., she can be found shooting music festivals and concert series, while licensing her archival work for books, magazines, documentaries, electronic media, and private collections.

Sherry’s folk music archives are also prominently featured in the “Greenwich Village: Music That Defined A Generation” music documentary (Netflix) and in “Troubadours” (the music of Carole King, James Taylor, and Joni Mitchell).

The famed Forum rock arena in L.A. and The C.F. Martin Guitar Museum in Nazareth, PA have permanent display panels of her images, and the Rock and Roll Hall of Fame used one of Sherry’s classic photos of Chuck Berry to close out their induction ceremony tribute to the rock ’n’ roll legend.

Her early Prince images can be seen in the pages of Rolling Stone’s Prince special tribute issue, being reissued again in 2020.

So far in 2020, her archival photographs have been seen in three major music documentary releases—“Linda Ronstadt, The Sound of My Voice,” “The Go-Go’s,” and “Laurel Canyon.” The newly Emmy nominated television series “Little Fires Everywhere” and Apple TV’s “Little Voice” have used her iconic Nina Simone images. In January, James Taylor personally chose several rare photographs of Sherry’s to be included in his very first Audible.com memoir, “Break Shot.”

Sherry resides in the L.A. area and is still shooting the pictures that have contributed to the visual history of our lives.

Register in advance for the event:
https://zoom.us/webinar/register/WN_jESn8W0LTFiMD8gIJoptLw