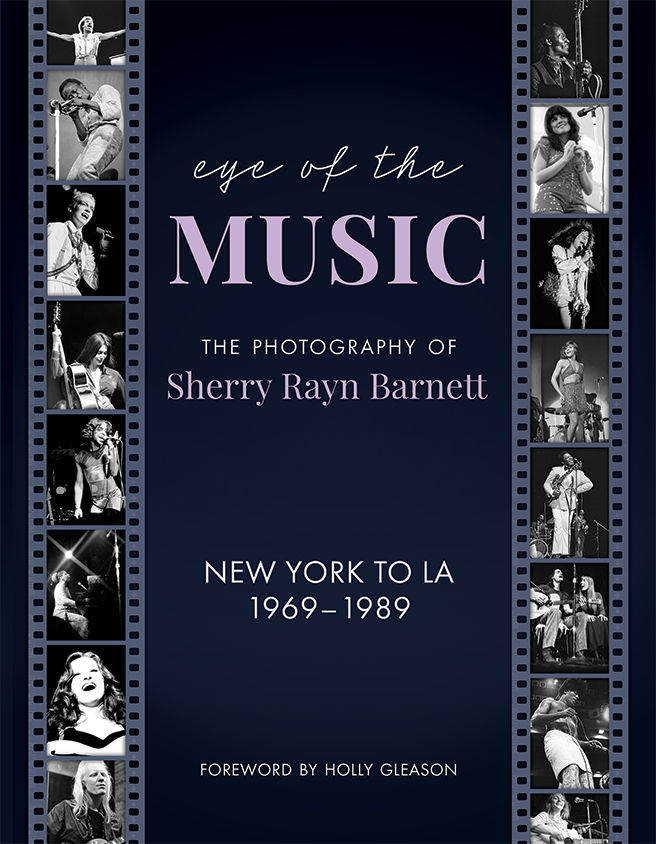 Sherry Rayn Barnett has been in the Eye of the Music since capturing, almost stealing, the most white-hot seconds onstage, the unguarded intimacies and the bolt of creativity, whether in the studio or at home.

Beginning in New York City as a teenager, Sherry chronicled the artists redefining what pop music was as the ‘60s gave way to the ‘70s for various underground magazines. Early iconic photographs of Tina Turner, Joni Mitchell, James Taylor, and Laura Nyro created trust and opened doors for revelatory images of Janis Joplin and Bonnie Raitt.

By the time she arrived in Los Angeles, the Troubadour scene was full-force. Sherry, who plays a blue Fender Stratocaster, was on the frontlines of the rock, pop, folk and Laurel Canyon country-rock scenes—as much a fellow musician as a photographer documenting the music. Disappearing into the music, she caught a young Linda Ronstadt, an almost hippie angel Emmylou Harris, the already prolific Jackson Browne, and pop superstars the Carpenters before seeing the punk upheaval deliver the Go-Go’s, Prince, and the Eurythmics.

Barnett’s gift is her ability to feel her surroundings, to recognize the perfect moments and create images that offer the essence of the artists she encounters. Again and again, she was there. Linda Ronstadt, Roy Orbison and k.d. lang, Nina Simone, Judy Collins all saw their best, most incandescent selves delivered through the lens of Sherry’s camera.

Now, for the first time, here is a comprehensive collection of all the images, all the moments, all the schools of music that have been part of the first two decades of one of the most far-reaching careers in modern rock photography. To Sherry, it’s being where the truth meets the players; for the rest of us, it’s a reason to celebrate how good music transforms everything. Exhaustively documenting the stars who marked generations, Eye of the Music offers a profound look into why some artists last—and some moments matter.

Once Upon a Time hosted a virtual event with Sherry and music journalist Holly Gleason on December 9, 2020.  Here is a link to the informative interview: https://www.youtube.com/watch?v=xb_xSBjVsVk&t=17s

Review by Maureen Palacios, bookstore owner:  OMG - this is a fantastic book that will make you hum along with all the musical legends depicted here in stunning photos shot by pioneering music photographer Sherry Rayn Barnett.  In my younger years, I was a paid musician with dreams of becoming the next Carole King and/or Linda Ronstadt.  Sherry's photos of these women, along with Carly Simon, Nina Simone, Bonnie Raitt and so so many others bring alive the music scene of both NYC and LA during 1969 - 1989.  A who's who of early images of greatness -- mostly at live concerts -- of Janice Joplan, Prince, and Ronstadt (to name a few).  I LOVE this book and it would make a terrific gift to someone who enjoyed the music, who wanted to be a famous rock'n'roll star, or anyone interested in early pop / folk/country music history, especially women artists.  Sherry's pictures capture the essence of many of these artists.  We have signed copies, while supplies last.